How to Protect Yourself from Breast Cancer

Home » Cancer Prevention » How to Protect Yourself from Breast Cancer 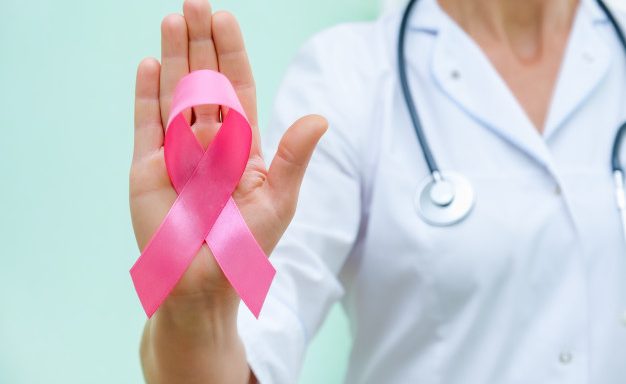 Breast cancer is among the leading health threats for women nowadays, according to the CDC it is the most common type of cancer among women in the United Stated. Earlier statistics, from 2003, indicates that one in eight women will be diagnosed with breast cancer in her lifespan. There has been a decline in breast cancer incidence in the past decades due to decrease in the use of menopausal hormonal therapy. Women have to be cognitive and take proper steps to prevent the disease as most of the major risk factors are modifiable (1)

A modifiable risk factor for breast cancer is unhealthy weight gain after the age of 18. Being overweight or obese, especially in the postmenopausal period is associated with increased in breast cancer risk, the chances almost double with the use of estrogen and progesterone hormonal therapy. Here is how excessive adiposity (fatty tissues) contributes to breast cancer (2):

Emerging research indicates that the type of dietary fat and the amount of fat plays a significant role in breast cancer development. Women eating more than 17 grams per day of linoleic acid (LA/omega-6) have much higher risk of breast cancer (3, 4). LA is known for its pro-inflammatory properties as it stimulates the secretion of inflammatory cytokines leading to low grade total body inflammatin. The American Heart Association recommends consumption of LA to be less than 10% of total caloric intake. Foods that are rich on LA include: fast food, corn chip, peanut butter, cured lunch meats, cakes with frosting, fried foods especially if fried in soybean oil. The pro-inflammatory effect of LA can be balanced with adequate intake of alpha linolenic acid (omega-3)

Epidemiological studies show that alcohol intake increases the risk for breast cancer even if used in moderation. The International Agency for Research on Cancer (IARC) has recognized the consumption of alcoholic beverages as carcinogenic to humans since 1988. (5) In 2010, ethanol which is the major constituent of alcoholic beverages and its metabolite acetaldehyde were also classified as carcinogenic to humans. Acetaldehyde ( a byproduct of alcohol degradation ) is a cancer-causing substance in experimental studies as it reacts with DNA to form cancer-promoting compounds. Alcohol alone generates reactive oxygen species which damage DNA. Additionally, alcohol causes inflammation which is a direct risk for the development of numerous cancer types (6)

Two highly respected studies, the Nurses’ Health Study and the Collaborative Women ‘s Longevity study found that those who reported to be active had 3-fold decrease in breast cancer occurrence. In a 2016 meta-analysis which included 38 cohort studies, the most physically active participants had a 21% lower risk of breast cancer development compared to the sedentary participants. (7). Increase in physical activity has been associated with similar reductions in risk of breast cancer among both premenopausal and post-menopausal women (7, 8). Even among women diagnosed with breast cancer the physical activity leads to significant improvement of total body healing. Brisk walking, biking or jogging of minimum 2.5 hours per week is needed achieve the protective effect.

Diets high in refined sugars have been shown to increase the chances of breast cancer development. Several epidemiologic studies have demonstrated a positive association between breast cancer risk and high intake of sweets, which may be due to an insulin-related mechanism. A population-based case-control study of 1434 cases and 1440 controls from Long Island, NY concluded that frequent consumption of sweets, particularly desserts, may be associated with an increased risk of breast cancer. (9) Consumption of simple sugars leads to insulin spike, insulin promotes the bioavailability of insulin like growth factor IGF1, which is known for stinulating cancer cell growth and inhibitng cancer cell death. These results are consistent with other studies that implicate insulin-related factors in breast carcinogenesis. (2)

Daily intake of dairy products such as milk and cheese, even in small amounts can potentially increase your risk for getting breast cancer as much as 80 percent. The findings were publishes in the International Journal of Epidemiology and the research was conducted at Loma Linda University School of Public Health in Southern California.“We found that at relatively low doses of dairy milk, less than a cup a day, leads to a steep rise in the risk of breast cancer” said Gary E. Fraser, MBChB, PhD, a professor in the School of Public Health and Medicine at Loma Linda University and the study’s lead author.The researchers analyzed nearly 8 years of data from 52,795 women in North America. Their median age was 57 and about a third of them were black women. Researchers concluded that regular, daily dairy products have to be avoided in our efforts to prevent breast cancer.

How to protect yourself against breast cancer

Maintaining equate vitamin D stores appear to be protective against breast cancer according to number of studies. The sunshine vitamin plays a vital role in calcium homeostasis, skeletal metabolism, immune, cardiovascular and reproductive systems. The worldwide prevalence of vitamin D deficiency is approximately 1 billion, with higher incident among population who get less sun exposure. Vitamin D deficiency is a serious health problem with numerous health consequences; it is associated with diabetes, rheumatic arthritis, Parkinson, Alzheimer diseases, osteomalacia, osteoporosis, and fractures in adults. Many reports showed an inverse association between serum vitamin D concentration and incidence of several cancers, including breast, colorectal, kidney, lung, and pancreatic. There is strong association of breast cancer in particular and vitamin D deficiency according to many research reviews. It is important that women maintain adequate vitamin D stores. (1) Find high quality vitamin D HERE. – this supplement includes both vitamin D and omega-3 fats together.

A systemic review and meta-analysis compared women who ate high fiber diets to women who consumend the standard American diet and concluded that the higher the fiber intake the more protective effect against breast cancer. Fiber is found in whole grains, fruits and vegetables. Lignants, found in whole grains, nuts, seeds, legumes, fruits and flaxseeds are particularly protective against breast cancer; this was shown by case controlled trails where women with the highest intake of lignants had the lowest incidence of breast cancer. Flaxseeds are particularly rich in lingants (10) In a 2018 review paper the authors concluded that clinical trails show that flaxseed can have an important role in deceasing breast cancer risk, mainly in postmenopausal women. (11)

Soy foods are rich sources of isoflavones phytochemicals, which act as weak estrogens and may have protective effect especially when consumed in childhood or adolescence. For breast cancer survivors, evidence suggests that consuming soy products had no adverse effect on recurrence and survival. The Life After Cancer Epidemiology (LACE) and the Whel study noted a trend towards improving prognosis among those consuming soy. Consuming two to three servings per day is considered acceptable based on usual intake in Asia and the amount of soy consumed in the epidemiological studies and clinical trials.  One serving of soy provides 35 mg isoflavones with the maximum intake of 100 mg of isoflavones per day which is about the average intake in people in China. Sources include tofu, tempeh, soybeans. It is recommended that supplements are avoided and isoflavones are consumed from foods as these foods provide other bioactive compounds that offer synergistic anticancer effect.

Several studies have examined the relationship between green tea intake and incidence of breast cancer. As green tea is rich in antioxidants including catechin epigallocatechin -3 ( EGCG), it offers protective role in the development of breast cancer and also inhibits cell growth. Unregulated cellular proliferation and cell degradation are a hallmark of cancer. Green tea constituents and EGCG are capable of inhibiting uncoltrolled cell growth and inducing cell degradation via a variety of mechanisms. Recent studies showed that EGCG suppressed unhealthy cell growth of triple negative breast cancer by activationg Hs578T cells(14), estrogen and progesterone receptor. Intake of 3 cups per day is recommended to get the cancer protective effect. It is recommended that green tea supplements in the forms of extract are avoided due to thier toxic effect to the liver when consumed in large amounts such as in supplements. (15)

There is a strong evidence that higher levels of physical activity are linked to lower risk of several types of cancer. (12, 13) including breast cancer. It is worth pointing out the evidence comes mainly from observational studies where people report their activity level. One can argue that people who are active are also eating healthier overall. Although observational studies may not prove a causal relationship, when studies in different populations have similar results and the results cluster and compile on such large scale a strong possibility for causal relationship exists. The recommendations is for 60 min moderate to high intensity physical activity most days of the week to get the cancer protective effect.