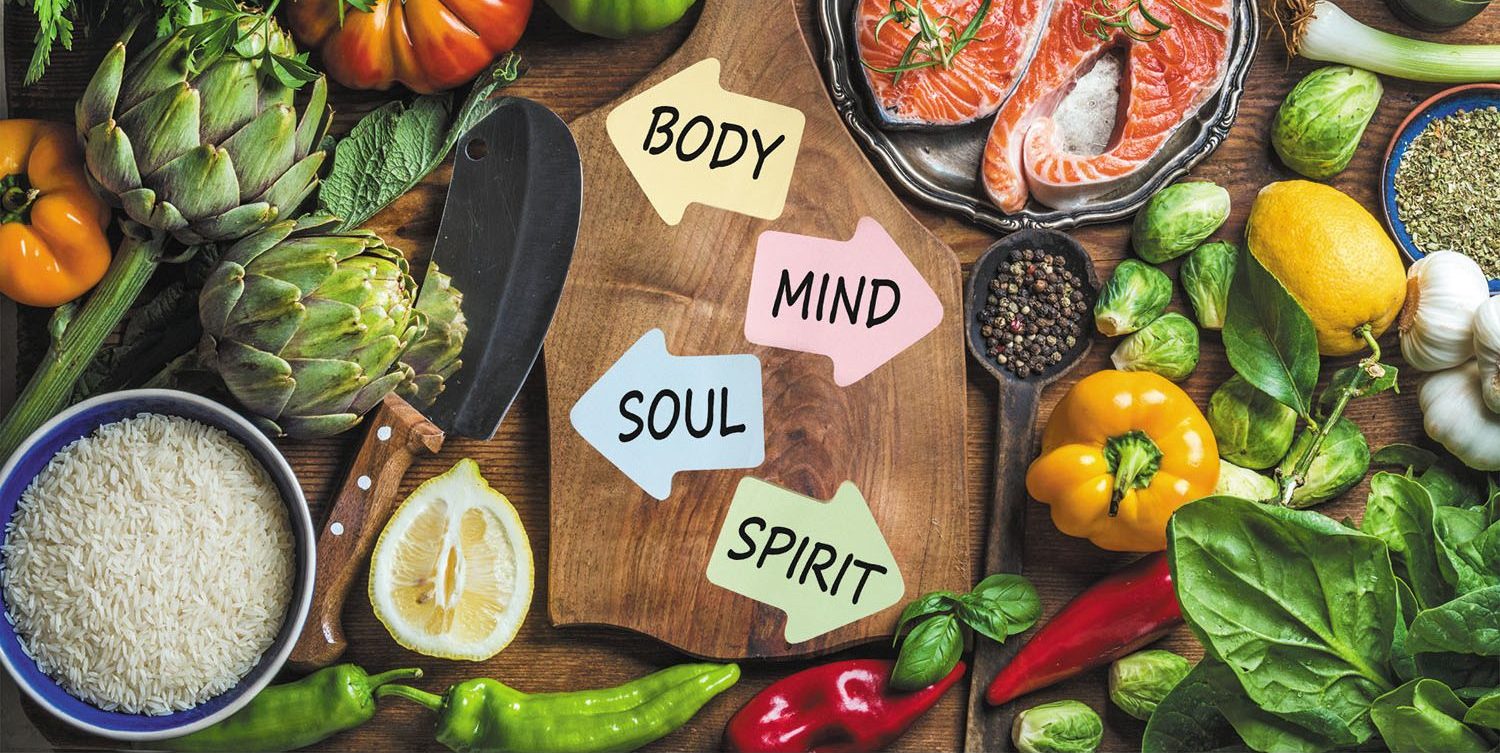 Growing evidence indicates that psychological wellbeing leads to reduced risk of physical illness; in other words, our mental state dictates our physical health. Prospective studies ( participants being followed over time ) show that when people start out happier they do, indeed end up healthier and live longer. (1,2). The literature reveals that high intake of processed foods, refined carbohydrates, saturated fats, inflammatory arachedonic acid and low intake of fruits, vegetables and resistant starches leads to depressive symptoms. Read more on that here.

How to improve mental health with diet !

An interventional study ( showing cause and effect ) published in Nutrition Journal in 2012 demonstrated that when participants avoided meat, fish and poultry their moods improved significantly; this could be attributed to the lack of the pro-inflammatory effect of arachidonic acid found in meat, fish and poultry. Researchers concluded “ eating less meat can help protect mood in particularly important among those effected by depressive disorder “ (3)

A meta-analysis from 2018 published in the European Journal of Nutrition suggested that high consumption of meat could be associated with risk of developing depression. A 2014 study in Brain, Behavior, and Immunity that used data from the Nurses’ Health study also found an association between depression and a diet rich in sugar-sweetened soft drinks, refined grains, and red meat.

Higher consumption of vegetables can decrease the risk of depression by 62% according to one prospective study. (4) A review in the journal of Nutritional Neuroscience concluded that eating lots of fruits and vegetables is considered as “non-invasive, therapeutic means to support brain health “ (5) Levels of serotonin and dopamine are controlled by an enzyme called monoamine oxidase (MAO), which eliminates dopamine and serotonin. In depressed people, the low levels of dopamine and serotonin are caused by high levels of MAO. Antidepressant medications are developed to block the action of MAO. Eating berries, grapes, onions and greens containing phytonutrients appear to naturally inhibits the action of MAO. In addition, spices such as cloves, oregano, cinnamon and nutmegs also seem to diminish MAO activity. This may explain why plant-based diets have an antidepressants effect.

Tryptophan is an amino acid found in plant and animal protein and is a building blocks of the happy hormone serotonin. Its presence in the brain is essentially important for the production of serotonin. However, tryptophan can reach the brain only in the presence of carbohydrates in the diet as carbs pulls the non-tryptophan amino acids away from the brain allowing tryptophan to feely pass the blood brain barrier. Nuts and seeds have the right amounts of tryptophan and when consumed with complex carbohydrate provide the perfect environment for serotonin production.

In a study published in the Nutrient Journal  in 2019, examined data from the National Health and Examination Survey / NHES (a total of 26,656 participants were survey data for 2005 through 2014 ) confounded that depression scores were significantly lower among nut consumers and particularly walnut consumers as compared to non-nut consumers. (6)

Current data indicates that 10 to 30 % of Americans have magnesium deficiency. The National Health and Nutrition Survey in 2006 founds that 36 of females and 31 % of males adults are magnesium deficient by blood test. Risk factors contributing to insufficient levels include; inadequate intake of magnesium rich foods, dietary aluminum ( in processed cheese, foods additives, baking powder) intake, supplements with calcium and excessive intake of vitamin D, commonly used medications B6 deficiency, some chronic diseases and more. Interestingly, rapid recovery from major depression was seen in several studies where researchers used magnesium instead of antidepressants. Magnesium regulates calcium flow in the neural calcium channels helping regulate nitric oxide production. When neuronal requirements for magnesium are not met, neural damage occurs which can manifest as depression.

Eating a pro-inflammatory diet can leads to fatigue and behavioral symptoms shown in number of studies. (7) A great way to decrease overall body inflammation is to feed your gut microbiome with resistant starch. (8) Restart starch, found in legumes, potatoes skin, and other veggies is the third type of fiber that nourishes your good gut bacteria and decreases overall body inflammation. There is an increasing recognition that the gut microbiota plays a central role in behavior and cognition, suggesting that the manipulation of our gut microbiota through diet may demising low grade inflammation and significantly improve mood and depression.

A 2011 study in the American Journal of Clinical Nutrition found that women who ate more vitamin D–rich foods had a lower risk of depression than women who got less vitamin D in their diets. The mechanism of action was not explained, but now we know that vitamin D is much more than a vitamin, it can act like a hormone and co-factor for many reactions in the body. The authors concluded that, ” effective detection and treatment of inadequate vitamin D levels in persons with depression and other mental disorders may be an easy and cost-effective therapy which could improve patients’ long-term health outcomes as well as their quality of life.“(9)

Large reputable research using data from the Nurses’ Health Study and the Women’s Health Initiative, included middle-aged to older and mostly postmenopausal women also found links between diet and mental health. This includes a 2005 study in the International Journal of Obesity, which found associations between obesity and depression and dietary factors.

Large reputable sides have linked vitamin B12 with depression. Interestingly, blood levels of B12 are not a good indicator of adequate vitamin B12 stores. One can use signs and symptoms of deficiency by the following parameters, energy level, confusion, brain fog, see below: (10)

Vitamin B-12 deficiency symptoms include:

If you are experiencing any of the following and you are eating mostly plant based diet there is a great chance you vitamin B12 is low. Proper vitamin B12 supplementation is recommended.

In conclusion, although, the factors contributing to depression may be multifactorial, diet seems to play a significant role. If you are experiencing bad moods making an effort to change your diet may save your mental health.